The Great Tales Of Middle-earth: Children Of Húrin, Beren And Lúthien, And The Fall Of Gondolin 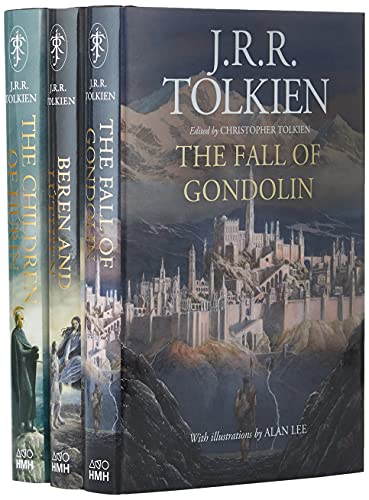 Recent Comments: The Great Tales of Middle-earth: Children of Húrin, Beren and Lúthien, and The Fall of Gondolin - Tolkien, J.R.R. (Hardcover)

What I am about to tell you about what I became is going to be very shocking. It is going to manipulate your emotions. It may include some random words in my native language for no reason whatsoever. It will teach you unnecessary things about my culture. It will not be smarter than a fifth grader. And it will include as many cliches and as much foreshadowing as is humanly possible. You are going to be shocked. I, for one, never saw it coming. So I doubt you will. Get ready. Aren't you so ready to be shocked? You're never going to see this coming
Last updated 4 hours 24 mins ago

Because The Great Tales of Middle-earth: Children of Húrin, Beren and Lúthien, and The Fall of Gondolin is adored by most people who read it, I am forced to conclude that most people need to read more. A whole lot more. You should be embarrassed if you like this book. Seriously. The moment I became a book snob, I became so embarrassed to be seen reading it that I accused the guy sitting next to me on the subway of putting the book on my lap while I wasn't paying attention. "How dare you, sir! Have you no decency?" I exclaimed excitedly in my native language.
Last updated 2 mins ago

This is the sort of book The Great Tales of Middle-earth: Children of Húrin, Beren and Lúthien, and The Fall of Gondolin reads to feel worldly. Just like the spate of American pop fiction in the late eighties, this is overwhelmingly colonized literature, in that it pretends to reveal some aspect of the 'other' culture, but on closer inspection (aside from the occasional tidbit) it is a thoroughly western story, firmly ensconced in the western tradition.
Last updated 27 mins ago